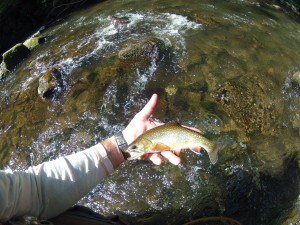 The lower Savage fished very, very well yesterday. There were caddis, cahills, sulphurs, yellow sallies, midges, and others coming off. Lots of little guys fishing dries, but when I threw on sculpzilla, I moved every larger fish in the river. It was ON! My camera battery died on me, but I did get this picture of a beautiful brook trout that took a parachute adams. Look at how fat that fish is. It’s one the thickest brook trout I’ve ever seen. The flows on both the lower Savage and North Branch Potomac are still great. Come and enjoy a day on the water with us! PJ

Well, Savage River Angler had another good day of fishing. Jim, Chris, and I floated through the papermill section a few days back and had a really fun day. The weather was nice and overcast for us and the fishing was a lot of fun. Lots of smallmouth bass and a few very nice rainbow trout were landed. Chris stole the show with a pair of nice rainbows. The fishing remains wonderful and the flows are still perfect. We don’t get conditions like this so late in the summer normally, so get up here and enjoy it. Thanks again for being great company guys! PJ 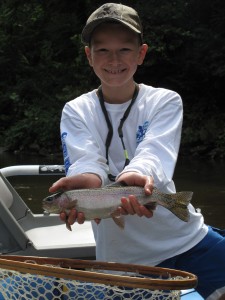 Chris and his pair of great rainbows. 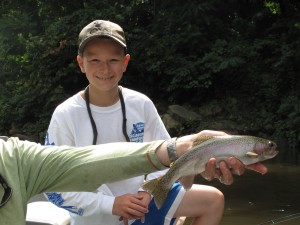 It’s been all dry fly action with Savage River Angler, LLC this summer. The North Branch delivered the goods again last night. Joe and I floated last night and blew it up again. I can’t think of a better season of consistent dry fly action. The slate drake hatch was light last night, but was joined by sulphurs and pale evening duns of various sizes. There were a few caddis, midges, and blue quills around too, but we never took off the parachute adams. It was just another unbelievable evening with a new friend. I don’t know what else to say. Here is a little video to make your mouths water. Give me a call to book a float. Your blowing it by not being here. The fishing has been so good I’ve been busy seven days a week, so call ahead. PJ

Oh man. You missed it again. Yet another fully epic adventure floating the North Branch Potomac!

Yesterday proved to be another unbelievable day of floating. Joe and I set out late in the afternoon for a quick half day float. The fish were coming up from way down deep in some of the deepest pools for a parachute adams. No need to nymph at all what so ever. Joe stuck somewhere around 25 fish, all on dries on our 4 hour trip. In the mix with all the wild rainbows were 4 cutthroat and a couple of browns. The fishing has not slowed one bit, so get on up here and enjoy the great dry fly action! PJ 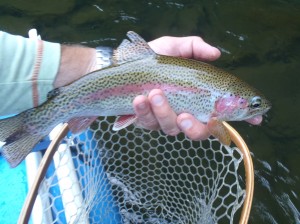 One of the many fine dry fly rainbows from last night.

Well, I keep waiting for it to slow down, but it just keeps staying good to excellent. The North Branch has been absolutely smoking hot this season. Aside from a few tough days, it’s been absolutely fantastic. The Savage has been very good, but with all the young of the year in it, the bigger fish are harder to find this year unless anglers fish streamers most of the time. The NoBr on the other hand has been soooo very good to us. Rod struck smoothly and often on mainly wild rainbows yesterday. The three browns that he landed appeared to be wild and also came to the parachute adams, but otherwise, we netted around 21 rainbows, each and every one of them was wild. No brookies or cutts yesterday, but that was ok with me. Rod absolutely got dialed in after we ate dinner. He wrecked it. It was EPIC out there! Not to mention a blast to watch an angler go from fishing just ok, to absolutely tearing ‘em up. What a fun night. Here is one of the 15″ wild rainbows that Rod stuck on the way down. 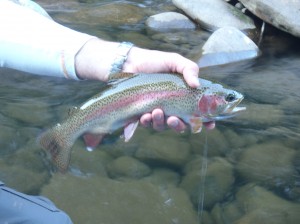 The North Branch and Savage Rivers are still smoking with great dry fly action. Garrett county is getting lots of rain, and the fly fishing is great!

I had a chance to slip out a few night ago and hit Spot X on the North Branch of the Potomac after a wade trip yielded all small fish on the lower Savage. There was an ok slate drake hatch that got all the fish looking up and I took full advantage with my parachute adams. Don’t forget to click the gear icon and then select hd 1080 since I’m not savvy enough to figure out how to make it be hd when I post it. Anyhow, the fishing was special. The fish were absolutely smashing dries. Check it out. Then get in your car and get up here. The float fishing is still great, and flows are optimum.

So, I had a full day wade on the lower Savage yesterday. We got in the water a little before 2 pm after waiting out a few storms. There wasn’t much bug activity, so we started “searching” with a caddis and parachute adams double dry rig. The trout were very quick to let us know that they would prefer the parachute adams. We then fished that adams with a zebra midge down. The fish stayed on the adams, refusing to acknowledge the midge. Lots of small brown and brook trout were fooled on the surface. Jim also stuck one pretty cutthroat that had made the long journey upstream from the North Branch. The action slowed after dinner, so we switched it up and fished a cranefly dry and started moving good amounts of fish again until we couldn’t see the fly. Mission accomplished. 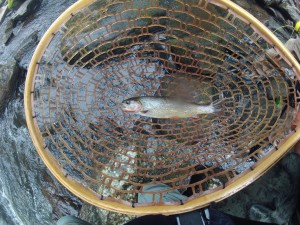 Last night was another wonderful evening. We took a half day float from Barnum – Bloomington and TORE THEM UP! Dennis managed to put his flies in the right places all the way down the river last night and was rewarded the whole way. The action picked up in earnest around 5:30 and peaked around 7:00. Everything was caught on dry flies. No need to nymph at all last night. Most of the fish were in the 10-13 inch range, but there were several beauties that went bigger. Most of the fish were wild rainbows last night, but there was one 13 inch cutt at the very beginning in the toilet bowl pool that took a parchute adams as well.   She’s really been fishing well and flows are excellent. Happy fishing. PJ

Remember to click on the gear icon in the lower left corner when you start playing the video and then select HD 1080!

We’ve been reporting mainly on the North Branch of the Potomac recently, but yesterday the lower Savage fished pretty well despite the heat and abundant sunshine. What a great place to escape the summer weather that has finally found it’s way to us. Good midge fishing was had in the pocket water yesterday, and a few larger fish were moved along with a lot of fingerlings, which has become a norm this year. A Griffiths gnat was the fly of choice. Come on up and beat the heat this week and get deep in the Savage or Potomac. Both are fishing well!

The fishing has remained very good on the North Branch of the Potomac and Savage Rivers. Even though it’s mid summer, the cloudy conditions and plentiful rain have kept the fishing much better than average. Recent wades on the Savage, although a touch on the full side, have been giving up some great dry fly fishing. There are an awful lot of smaller fish this year, which has resulted in good streamer fishing action as well.

The North Branch of Potomac has also been giving up high yields. On my float last night, it was a typical slow start with the action picking up right on time around 5:30 pm. Most of the action was fishing on top with dry flies, while the nymphs mostly were ignored. “Spot X” provided a much anticipated flurry of rising fish as did most of the other fast water once things got going 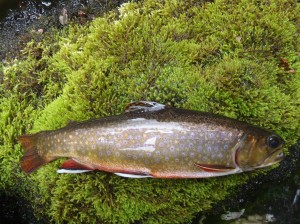 . While targeting the monster that broke a client off a few weeks back, Royce managed to move a bunch of solid wild rainbows fishing a large olive sculpzilla. Get up to the Deep Creek Lake area and fish some of the other rivers and streams. Most of the flows are very good right now and temperatures are still nice and cool. The fishing is great. Come and enjoy it with us.