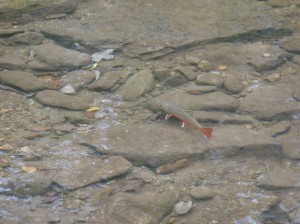 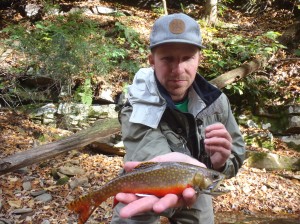 I fished the lower Savage, a brook trout stream, and the North Branch Potomac this week with a good friend who was in town from California. All three days we spent on the water were about as good as it gets. There were an awful lot of dry fly fish taken, equally as many on nymphs and buggers. We fished mainly streamers in the Savage and crushed large-monster size browns. The North Branch floats have been excellent with lots of dry fly and streamer opportunities. 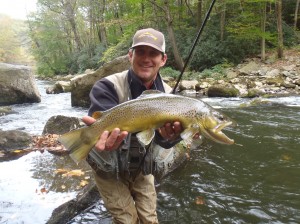 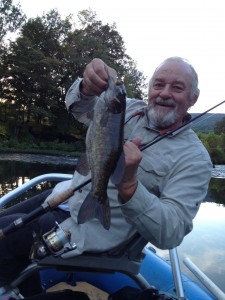 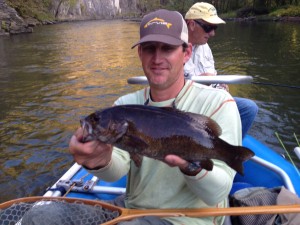 Savage River Angler floated downstream from the paper mill again today in hopes of moving some big pre spawn browns along with the large rainbows and smallmouth we were expecting. The mill has not been releasing any effluent this week, so we expected good visibility for both anglers and hungry fish. We didn’t get a whole lot of what we were expecting in the morning, however. The water was a very nice milky clear, but we only caught around 10 smallmouth before lunch, and had at least a couple of VERY nice rainbows come off. The water temperature had cooled dramatically overnight to 56′ though, and we hoped things would heat up as the water warmed throughout the day. Man did it ever! We noticed a big difference in the action immediately after lunch. Lots of small fish initially, and then we got down to a certain pool and I noticed a TON of rising fish. Upon inspection, I quickly realized we were in the middle of a full blown flying ant eruption. #16 cinnamons and #20-22 blacks were everywhere and the fish were feeding furiously. A quick change in tippets and flies and we were throwing to a lot of very fine rainbows. The bass were also getting in on the ant action and quite a few were landed along with rainbows that were lined up all the way down the pool. We didn’t catch any large bass on the ants, but in between rising pods of trout and small bass we started to catch some really nice smallmouth on big stuff. Talk about an unbelievable finish. It doesn’t get much better!

The trout fishing is starting show signs of big fish activity. We had a pretty fun one the other day. We decided to pursue bass and large trout today downstream from Bloomington. It started off well with around a dozen trout, but oddly not too many bass. The water was 6 degrees cooler (60) than it had been the day before, so maybe the bass didn’t like the drop in temp. Anyhow, buggers and caddis pupa did the most damage for us. Here’s one of Royce’s fine trout from the day he caught while stripping a wooly bugger. 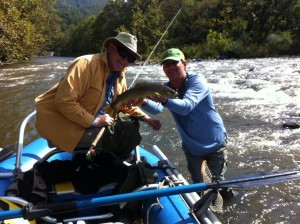 Great fishing the past week on both the North Branch and Savage. 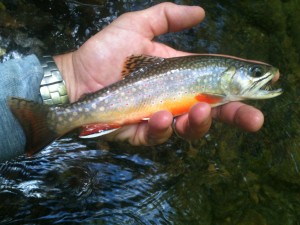 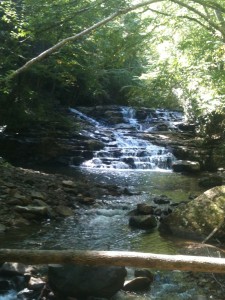 The streams have been firing this last week.

The water is back down and the flows are perfect again. I have floated the NoBr Potomac a few times through the paper mill and have had very good action both on top and fishing streamers. Lots of smallmouth bass and trout taking everything from poppers and mouse patterns to buggers and clousers. Yep, the trout are taking the poppers too. Fun stuff. The lower Savage has fished well too, but it’s more of the same. Lots of small fish on top and moving a few more of the bigger ones fishing streamers.
Here’s where the goods were at this week though. The little brook trout streams have been a real treat again for a few anglers that had me show them a couple of quality public access streams. The brookies have started to get a lot of their fall color now. The brookies are really aggressive right now.

Savage river Angler has spent a fair amount of time fishing some of the little fish streams the last couple of weeks. It’s been phenomenal on the brook trout water. The flows have been good on the trib’s and the fish have been responding well. The are attacking anything that you throw in the water. Terrestrials and caddis have been my staple for the last several outings. The males are starting to put on that gorgeous color that they get in the fall. 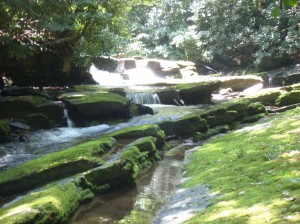 And the big browns are finally eating dry flies again on the lower Savage!

Yesterday I got the chance to meet Ken and Katy Wingert to spend a little time on the lower Savage. After explaining to them how critical fly presentation was and not necessarily fly selection on the lower Savage we got our waders on and hit the stream. We started with a parachute adams on Ken’s 6x leader, and a Savage hopper on Katy’s. Within a couple of casts, the largest fish I have had eat a dry fly in there for a while slurped that hopper down and we never looked back after that. Katy kept putting the smoke on GOOD fish with the hopper while Ken fished a variety of different flies, all of which worked equally well. I can honestly say it was the best morning I have had on there for a while. Lots of action on top with lots of nice browns. What a great morning with new friends! 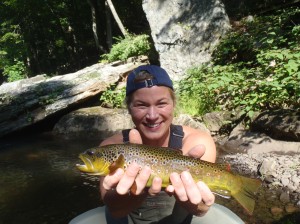 I hooked up with Rod and his son Alec the other day to try and get Alec on his first trout with a fly rod. It wasn’t long before Alec had his first of many fine brookies from one of the wonderful streams in the Savage watershed. Flows were perfect, and before too long we wre hitting multiple fish in just about every pocket, pool, and run that looked fishy. With all the recent rain the small streams are smoking! 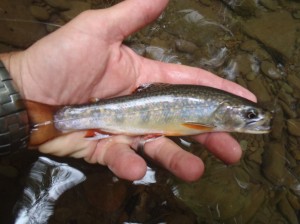 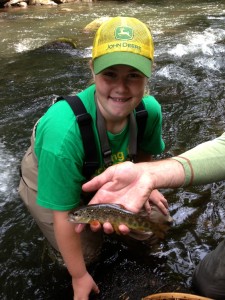 A few days ago I took a 1/2 day wade trip with and wasn’t really sure what I would be getting into. It was a brother and sister who pretty much had no experience except for a few pan fish from a pond and a casting clinic just before that. We decided we would go ahead and fish the North Branch Potomac to get started, primarily because I figured they would need a bit more help with casting and there was a nice grassy area to work out the kinks. After about 10 seconds of casting, I was impressed. Whoever it was that taught them how to cast did an exceptional job. Off to the water we go. Ellie and Ben stepped into the water, and after a brief explanation of where to “hunt” for trout, started casting, mending line, and presenting flies better than most of my clients that have years, even decades of experience. One thing that we didn’t get was a single fish to move for a variety of flies, both nymphs and dries. We gave it about an hour and decided to move to the lower Savage. I generally wouldn’t have wanted to take beginners there, but these kids had skills. Very quickly I showed them how to get in close to likely fishy spots and get a dead drift with their parachute adams. Ben had his first ever trout, a nice little brown, in minutes. Now it was Ellie’s turn. After a couple of good drifts to where I thought I had seen a fish move, a wild brown trout slid up and slurped her adams down. She set the hook perfectly, like she had been doing it here whole life, and brought the beautiful little brown to the net. We got a picture and a few fist bumps in and released here first trout ever (and on the lower savage on a fly!!!). It was a really special day for me. These kids are the future. Look out to all us old guys. These kids are going to wreck it with the fly rod. As a matter of fact, they went on to catch more fish after I was gone later that afternoon. Thanks again to Ellie and Ben. Keep fly fishing!